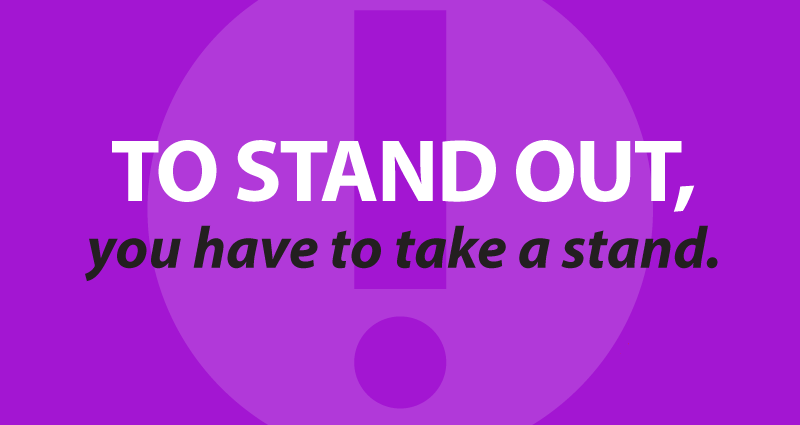 There were a couple of examples of fun, interesting, and ultimately effective marketing that we picked up on this past week.

The first was a bottled-water alternative called Liquid Death.

The second was a racy, definitely cheeky (excuse my dad pun), and likely NSFW voting PSA. It’s even called “Get Your Booty to the Poll.” (Don’t worry, this link goes to the NPR article — but you have been warned if you click the video…)

And they both follow two fundamental elements of good marketing.

First, you have to get their attention.

Both of these are prime examples of outrageous, in-your-face, no-punches-held marketing and branding. They don’t pause to apologize, explain, or make you feel more comfortable. They draw your attention and try to get you on board as quick as possible.

Both also happen to be highly effective at conveying their message. The voting PSA may not fit into polite company, but it covers the impact of voting on your local prosecutors, cash bail, sheriffs, and the importance of down-ballot races. That’s a lot of info for just over a minute-long video.

The folks at Liquid Death also get right to the point with a giant ‘Murder Your Thirst’ in horror-flick font. A quick scroll takes you right to their #DeathToPlastic campaign. You can see how they align an environmentally-conscious call to action with their love of death metal imagery.

These pieces pull off the no-holds-barred approach so well because they know exactly who they’re targeting. They know who is going to listen and who is interested in what they have to offer.

Liquid Death is targeting young people in their twenties and thirties. People who like to have fun, but also want a bottled-water alternative they can order at a bar. People that are aware of environmental issues, and want to do something about it.

And at that age they also might be starting a family. So Liquid Death’s website even has a baby name generator in case you wanted to name your child something like “Rock Bloodhorse” or “Spewer Meatcake.”

They might be rolling the dice with their incentive for actually changing your baby’s name, though. I mean, would a new parent actually saddle their kid with a name like that for the chance to win a prize? Never mind. Poor Gryll Marx. 😉

I’ll let Angela Barnes and Paul Fox explain the rationale behind “Get Your Booty to the Poll.” If you’re interested, give the NPR article above a read. The video clearly targets audiences where strip clubs are part of the mainstream. They’re using their deep local savvy to get an edge, so why can’t you? Give your locals some love.

I’m not saying that you need to start a death metal-themed Credit Union (but if you do, let us know!). The takeaway here is that to stand out, you have to take a stand. And maybe be a little outrageous.

← Don’t forget to listen to your followers.What’s your Mission? →